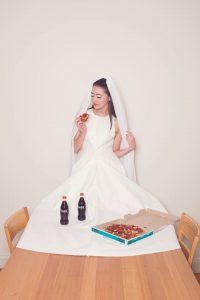 I chat to two young ladies with very different opinions on marriage, and I discover that the word ‘marriage’ has many more underlying meanings than I originally thought.

At 21, I suppose some might call me an adult. Although I still feel like I’m 18, my Facebook news feed has been suggesting otherwise. I have seen at least 3 engagements in the past 2 months and a couple pregnancies. What adds to this is my best friend from high school was just married on the 25th October. So, I guess my mind was on weddings quite a lot.

With each engagement I saw, it got me thinking. They were all different types of people, of varied ages. Historically, women were married quite young, and then became a housewife. As time went on, the ages for marriage gradually became older as women began to become more career focused. But where are we now? Is there a set theme? And what do we think of marriage today?

Winnie Huang, 22, is a long friend of mine. She is doing her Honours in Fashion Design, and I’m well aware of the sleepless nights she has just spent studying; so we decide to chat over lunch (well, breakfast for Winnie), and of course, coffee. Winnie doesn’t drink coffee often, and when she orders one, I know she has been working hard.

We chat about what she’s been working on for the past few months, and she explains how she is trying to change the way people view a wedding dress. Instead of satin, lace, silk and organza… She decided to look within the household, and use domestic and industrial materials to form the idea of the housewife and her life after marriage.

Winnie explains how during a workshop with a designer, she was told to pin fabric to a wall, and the colour of her fabric was white. With this, she tried to create shape and silhouette. During the process, the designer stated that the overly draped white cotton sateen looked like a bride gone wild. It was then she realised that brides always look too perfect. Winnie passionately discusses how the bride is always glamorous; elegant and romantic with silk and pearls. But what would a bridal gown look like if it wasn’t flattering? It was then that she imagined a disastrous bride; an unorthodox bride.

The matter-of-fact way in which Winnie states that the wedding day is made to be the biggest day of a bride’s life; and so ‘naturally, they have to look their best’, doesn’t take me by surprise. I completely agree. But then she asks, ‘what if there was no expectation? What if they could wear something with meaning?’ Something that stood out to me while she was talking was that she simply stated, ‘for the one day, the bride is glamorous. After that day, she wears gloves and aprons.’

Winnie’s project is titled The ‘Subverted Bride’. It is subversive not only because of the unordinary, socially unexpected materials used in her wedding gown as opposed to satins and silk, but to sabotage the romanticised gown, and overturn ‘contemporary conceptions’. Winnie explains how she used unconventional materials to show the attachment of the female role to her marriage- pegs, shower curtain, drawer liners, latex gloves, shower loofas, placemats, table covers and curtain lace… And she uses the wedding dress as a suggestion of marriage leading to a contractual institution.

During our chat, it is clear that this is a topic that Winnie is passionate about. She hardly pauses for breath, and you can almost see the line of thoughts going through her head as she speaks. At one point, she catches herself and pauses to take a sip of coffee, but then puts the cup back down again and resumes talking. The coffee is soon long forgotten.

I asked what I knew was an obvious answer, but I thought Winnie could give me much more than a simple answer; and I was right. I asked her, ‘so why do brides wear white?’ Of course, white means purity and innocence; white use to symbolise that you were a virgin. The tense is past tense here as although the white is still used today, it is naïve to believe that all women who wear white at their wedding are still a virgin. Then, she mentioned that one word. In the end, it all comes down to tradition.

It means that they’re getting married. Its official- they’re putting on the white dress.’

Stephanie Buttigieg is 22 years old. She is currently a neurophysiologist and studying her Honours in Bachelor of Science (Psychophysiology) part time here at Swinburne. Stephanie aspires to run a neurophysiology clinic in a hospital, or to conduct clinical research. She has also recently become engaged.

On their three-year anniversary, the couple had a weekend away in the Yarra Valley. They went to Healesville Sanctuary, stayed at a winery, indulged in wine and chocolate tasting, walked around the grounds before a fancy dinner, went hot air-ballooning, and finished it all with a proposal at sunset. Although she had expected it to happen while they were away, after the hot air-ballooning she was completely caught off guard; ‘I went numb and I was just so happy I cried like a little girl.’

According to Stephanie, before her fiancé Brendan, she had never wanted to be married, and was completely against the idea of having children; they were never of any interest. Stephanie reminisces about speaking to her mum one day about this fact, and her mum replied with, ‘wait until you find the one for you and that will change completely’. But Stephanie never really believed her.

Less than 6 months into their relationship, all Stephanie’s opinions changed, and she warmed to the idea of marriage and children. From then on, she already knew what she wanted. They decided to simply wait until they felt they were ready. 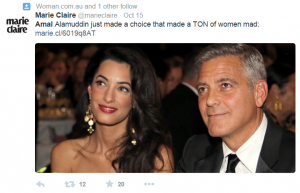 If you live under a rock, or avoid celebrity news at all costs, you may not have heard the massive debate around Amal Alamuddin becoming Amal Clooney after marrying George Clooney recently. The main arguments are generally this: people have thought that in the 21st century, keeping your own name is a normal thing to do. Many are now surprised when their friends and colleagues change their surnames after marriage. The topic of feminism is brought up, and this is debated. Our feminist foremothers fought for women to be independent from men, but then, Amal is technically making her own choice and well, your surname comes from a man, too.

Jamila Rizvi for Mamma Mia debated about the fact that Amal Alamuddin is a woman with many accomplishments, and now she is ‘going to let herself be defined by her husband and his name’. This is a thought that is echoed in many other news articles.

I ask Stephanie if she has heard about the ‘last name debate’, and what she personally thinks of it. She confidently states that she is happily taking her fiancé’s last name. Why? Because to Stephanie, marriage is about becoming a family, and she doesn’t understand how that is meant to happen without having the one name. Besides the formal paperwork, Stephanie doesn’t see the difference between being de-facto and married without the last name change.

Stephanie also takes into account that she wouldn’t want her children to have a hyphenated name as it might appear that they come from separate families, and she also believes that it ‘gives off the vibe’ that the wife doubts the strength of the marriage as they are not willing to identify themselves as a married woman.

Although I had planned to bring up the topic of ‘the last name’, Winnie brought it up herself while we were talking about traditions in cultures. Winnie confidently and passionately stated, ‘I just want to be myself. I’m proud of where I come from and my family… I’m not going to change my last name. It’s me. It’s my identity.’

Stephanie acknowledges the point of view concerning sexism, as the man doesn’t need to identify himself as married, but she mentions that her dad is very traditional, and says that ‘a bit of that has rubbed off’ on her.

Within Winnie’s family, household duties are spread evenly between her mother and father. But, when she goes to her boyfriend’s house, it’s a different story. Winnie fervently shares how whenever she goes to her boyfriend’s house, the men all sit on the couch, while the women are in the kitchen. ‘When I’m there I help out because it’s expected. I always think, why am I doing this? This is not my family. But my boyfriend just shrugs and tells me it’s expected.’ It is clear from her tone and language that this is something she does not agree on in the slightest.

As a job on the side of her studies, Winnie works as a wedding caterer, and as it is her duty to look after the bridal table most of her time, she gets a lot of information. Winnie shares how in the Asian culture, the groom and his family pay for everything as it means they are getting to ‘keep’ their new daughter-in-law.

We saw this with our best friend’s wedding, too. Our friend, Vera, is Albanian. At the start of October we attended our first Kitchen Tea. Winnie reflects on how she had no idea what a Kitchen Tea was, and stated ‘why do Kitchen Tea’s still exist?’ Why do we have to give a present that is related to the kitchen?