Far Cry 3 is an open-world first person action game.  You play as Jason Brody, an average 20-something American, on holiday with his friends at a tropical island. Skydiving over an island infested with pirates gets you captured and separated from your friends. The game revolves around you escaping, regrouping with your friends and hunting down the pirate leader who orchestrated your kidnapping.

Once the tutorial missions are complete you are free to explore the island at your will, ignoring the story if you want. You can climb radio towers to reveal parts of the map, clear pirate camps to liberate an area of the island from them, or do side missions for the natives such as hunting wild animals with bows and arrows.

Far Cry 3 appears to have no relation at all to the previous Far Cry games, just as Far Cry 2 was with the original Far Cry. In fact, an easter egg indicates that Far Cry 3 may actually be part of the Assassin’s Creed universe. Both game series are published by Ubisoft. 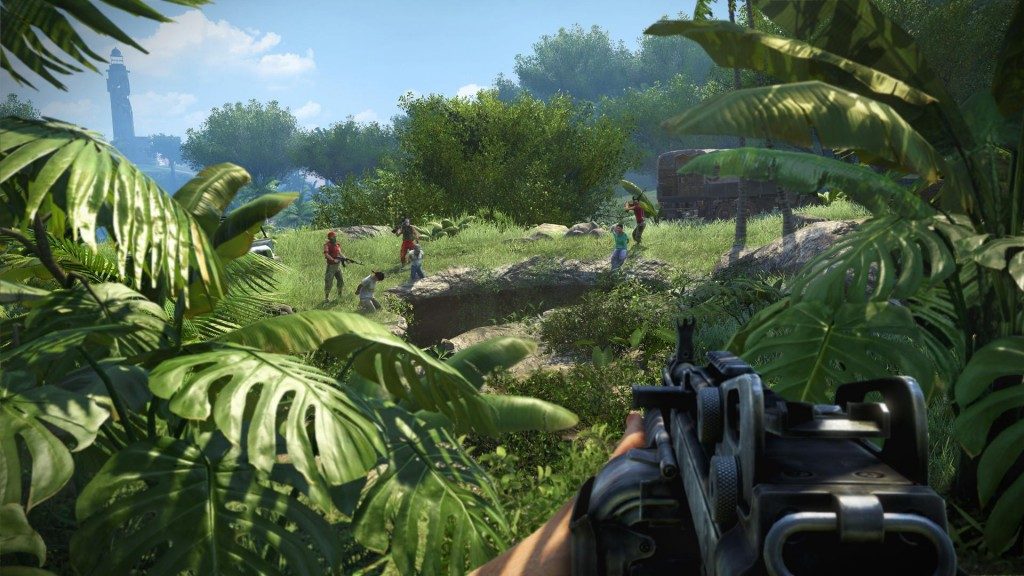 There is a very polished feeling, and the game runs very smoothly. It is pretty easy to become engrossed, especially when hunting pirates or animals and trying to be stealthy.

But there were some parts of the game that felt a little odd. I had acquired a flamethrower and had been using it for some time, when I had a mission where I am given a flamethrower. Despite having already used and having already burned to death dozens of pirates, the player character reacts with glee and surprise about having to use a flamethrower. “Oh my god, the flamethrower is AWESOME,” screams Brody, as he burns marijuana crops, despite having used it for a while and in fact having already upgraded it multiple times. When the mission is complete he exclaims, “I really liked the flamethrower.” Obviously this is just a little quirk with the game that assumes you haven’t used it yet, but it still pulled me out of the game and left me with an odd feeling.

I found the player character to be a little grating after a while, especially when he is talking to himself. Some of the things he says to himself are blatantly obvious and unnecessary. Fortunately this did not bother me too much.

Overall the game is very fun and if you are looking for an open-world game to run amok in, as well as a fairly interesting story, then you will enjoy Far Cry 3.