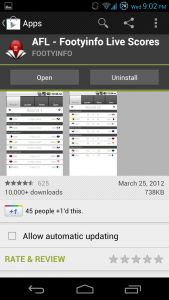 The 2012 AFL season is in full swing, and what’s more important than keeping up with your team on the go? There are a number of Android apps dedicated to AFL scores and ‘Footyinfo’ is just one of them. A free, ad-supported app with all the stats you could ask for, Footyinfo isn’t a visually striking app, but it contains all the numbers in the palm of your hand.

On opening the app, the current round is displayed – stadiums and all. The ladder is just a tab to the right, even including the all-important for-and-against percentage, however the teams aren’t listed in number order. A quick glance at who’s on the brink of the eight turns into a kindergarten-level counting lesson. 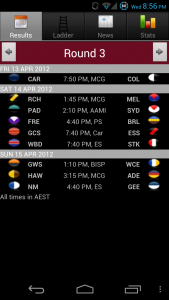 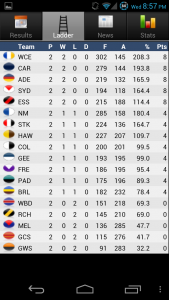 Move over a tab and you’ll find a news feed, gathering headlines from the usual sources – Herald Sun, Sportal, afl.com.au and Fox Sports. Unfortunately this does lead to some repetition, and what you see is what you get so you can’t scroll down and hope for more.

The stats tab includes some historical statistics, including most goals kicked by a single player in a match and even most tackles by a single player in a match, but oddly enough it doesn’t include any stats from the current season. It does include some SuperCoach statistics – values and consistency ratings – but unfortunately there’s no way to check out how your team is shaping up.

Heading back to the main page, the quick results are nice, but it does only show you the total score without the goals and behinds. Click on the game and you’ll find a bevy of information, up-to-date during a live game and totaled after the final siren. All the team stats are there – goal kickers included. Quarter-by-quarter scores are too but only in the form of a running tally of goals and behinds, another time where a total would be handy. Diving deeper reveals all the required individual player stats, including Dream Team and SuperCoach points. 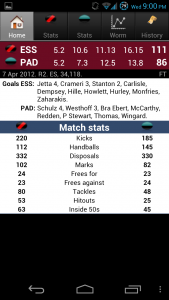 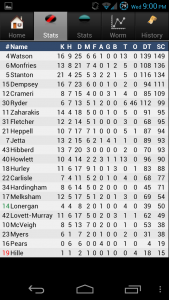 There is a tab to display the score worm, however in all the matches I opened, this tab was broken and displays a webpage as being down. That would point to a database issue rather than the app itself, so hopefully it fixes itself through the season.

History, the last tab in each match panel, has some hidden gems that I’m sure footy fans will enjoy checking out. Not only do you have the rundown of wins per team, there’s also lists of ten recent meetings, highest and lowest scores by each team, greatest winnings margins and even the longest winning streaks in the series. Unfortunately. in keeping with the rest of the app, this page does get confusing.

The home team of the upcoming match is on the left in the main heading, but the recent meetings list has the home team of the past matches on the left regardless. Scrolling down shows the four historical stats with no indication of which line belongs to which team, until you remember the main heading above the recent meetings. However this is – almost – excused when every single match referenced is clickable (apart from the longest winning streaks).

On the plus side, I can click into any of these matches and see who had the most possessions and who kicked the most goals, just as you would with a match from last week. I noticed the Bombers’ third-highest score of all-time against the Kangaroos was a score of 27.9 (171) in round 16, 2001, a match remembered for one of the most exciting comebacks in AFL history. Matthew Lloyd kicked 9 goals straight and Jason Johnson had 31 disposals. Sorry, there’s no retrospective Dream Team scores to be found here. 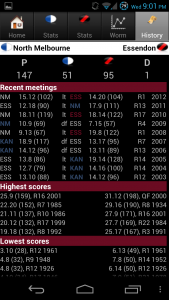 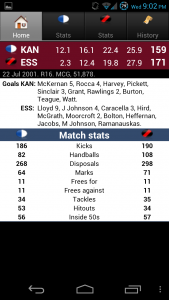 Footyinfo is an app with a lot of depth, and that gets it over the line. There are a few areas that could be improved, including the look and feel, but for checking the scores and turning back the clock, it’s one of the fastest and most detailed there is.